Five months later and we're back on the road. I still have a laundry list of things to button up and the brakes are still dicey, but the old orange crate is off jack stands and on the road! 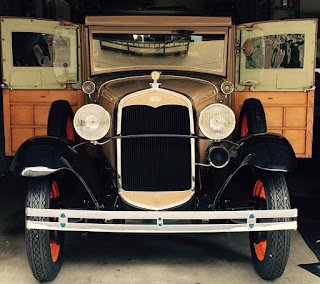 After a small false start, where I stalled and then flooded the engine while driving down the ramp from our upper garage area, we were on the road. The car ran strong, and was purring like a kitten for over 20 minutes. We only drove 1.6 miles, but had a ball. 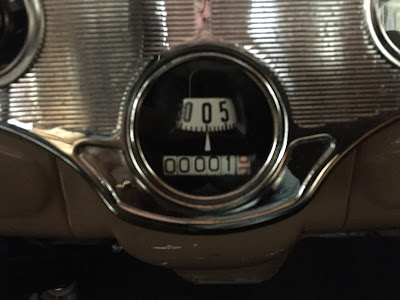 Once I get the brake adjustments squared away, we'll go out on a longer shake down cruise.

Kind of a Momentous Occasion


The tires are mounted with new "show" hub caps and stainless lug nuts installed. I'm starting to see the light at the end of the tunnel. I thought I'd really miss the white wall tires, but these all black Goodyear diamond treads sure do look nice! 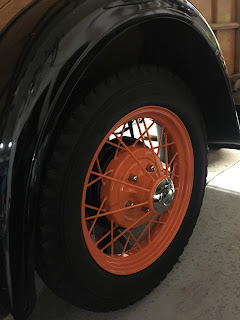 Just a few more things to complete before road testing and dialing everything in.

I can't wait to see how the woody rides with new springs, shocks, tires, brakes, etc.
Posted by Brian at 7:42 PM No comments:

More Vintage Photos of Our Woody!

From the Altos Computer Annual Report 1981. I don't know a lot about the circumstances of how they found out car and what the deal was, but I do remember when Poppy (my Grandpa / Restorer of the Woody) came back with all the fake Altos signs and license plates. I still have a couple of them hanging in our garage. 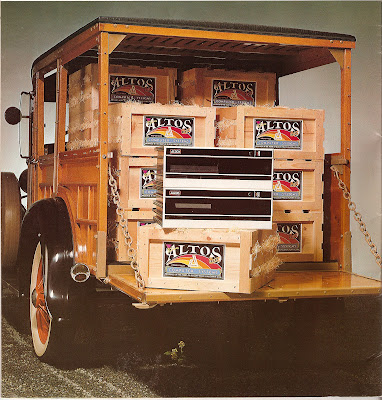 I also remember around the same time the Woody was used in a movie. I haven't figured out what movie it was, but keep my eyes peeled every time I see period cars in a 1980's movie.
Posted by Brian at 7:30 AM No comments:

Made a lot of progress today. I reinstalled the radiator and filled it with water. No leaks! Started the engine and ran it for 10 minutes or so... Sill NO LEAKS! I have the radiator squared up to the frame rails and have the support rods locked down. I haven't installed the stainless shell yet because I have a couple dents to deal with, so the hood is still off the car as well.

The clickity clackity vale train noise I was hearing went away after the car warmed up. I think it's just going to be the personality of this engine... time will tell. The other good news is the squeak I was hearing when I wasn't depressing the clutch appears to be gone. I swapped out the spring and plunger on the timing cover and also found several missing oil pan bolts... Not sure what fixed it, don't really care... just hope it's gone for good! 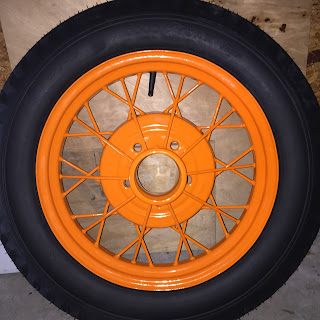 I was also able to get my wheels back from Les Schwab Tires. It ended up taking over a month from the day I dropped off the wheels until I was able to pick them up.

The story as it was relayed to me was they were accidentally dropped off at the wrong location and the truck only stops at each store once a week. It was kind of a bummer that I had to wait as long as I did, but at least they're here now.

The good news is they look great and the price was right at only about $30 a piece. We decided to go with orange vs. switching out to black, so now I have a fresh set of black wheels for a future project.

Pictured to the right is my first install attempt. I have since straightened the valve stem.

The Good Year tires went on fairly easily once I used a thin plastic bag as a lubricant. I found a video on YouTube showing how to do it. I was skeptical, but it worked out nicely. I still have five more wheels to mount, but am taking my time as I am still waiting for new stainless lug nuts to arrive from Bert's Model a Store.

I was going to switch out to metal valve stems, but decided to hold off for now. The original (or early reproduction?) valve stem covers appear to be a different thread from the valve stems I bought. I'd rather start driving the car soon rather than hold off on finding the right parts. I can always switch out at a later date.

Next up is mounting the last five tires, final adjustment of the brakes, install floorboards / cown panels, and then start putting miles on the 'Ol Orange Crate :)