A busy day in the garage

About 90% torn down today. Still need to take a peek at the timing gear / plunger. 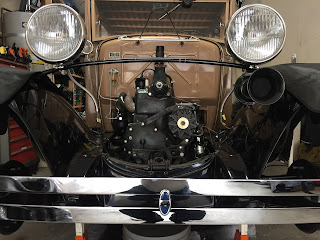 It's been two months since I started seriously working on the Woody, and I have made a ton of progress. Of course, as to be expected, every step forward includes uncovering another six things to work on, and another pile of cash spent. All in all, I'm pretty proud of how much headway I've made. As of this morning, the car is totally roadworthy, but by this afternoon it won't be! More info below... 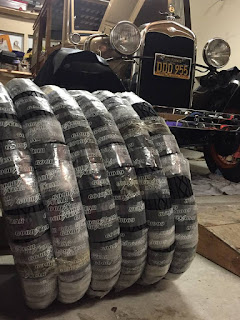 
I'm working towards a goal of making it to Woodies on the Wharf in June, but hoping to be able to make it to Friendship Day in May.

Vintage Photos of Our Woody

I went to my mom's house and spent the afternoon looking through old photos. I found a ton of great photos, and had a great time walking down memory lane. We found the original negatives from the day my Grandfather brought the Woody home for the first time. It's amazing how beat-up it was before restoration!

These photos are from 1962, 31 years after the car rolled off the assembly line. 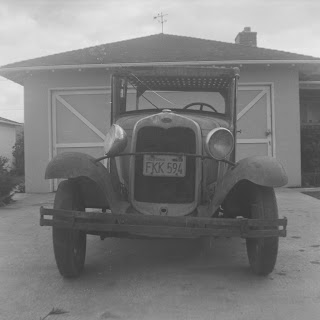 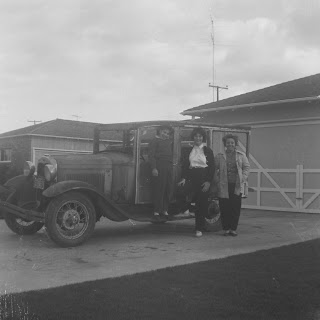 And these photos are from 1963, after the Woody was restored. 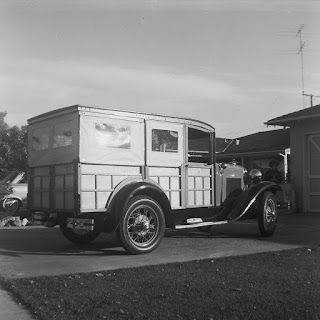 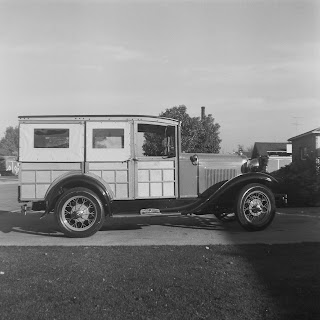 It's fun looking back at these old photos because I'm able to see the choices he made during the original restoration.For example, the split rear bumper, running board steps, single side spare, etc. He made a lot of changes over the years and it's fun having photos showing the progress.
Posted by Brian at 8:29 PM No comments:

After I bit the bullet and ordered a set of Stipe shocks, I spent a couple weeks painting everything up and getting ready for the big install. I had been dreading installing my new shocks for weeks. I read plenty of horror stories online about how hard it was to install them.

My original plan was to reuse my original shock links, but as soon as I stripped off the old paint, I realized they were in really poor shape. They were full of scars and had signs of previous body work (Bondo and lead) that I'd have to deal with. There was also scarring on the inside of the tube, which I thought would prevent a smooth install. I decided to use reproduction tube links, and was pleasantly surprised how everything went together. 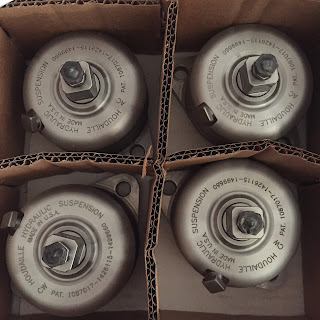 From reading instructions, it's as simple as popping the links over the shock shock arm and suspension balls. I knew this was not the case as I tried to reinstall one of the old ones a while back, and never got it to seat fully.

Here is what I learned, and how I'd do it again if given the need.

And here is a consolidation of tips I read on the Ford Barn and other places that helped me do the job.
All in all, it was pretty simple. 3/4 of my links went right on. The 4th gave me some difficulty, but I was able to get it to pop on by swapping out one of the brass cups with one that was slightly thinner.

And best of all, the ride quality is SO MUCH BETTER! I only did a quick trip around the block, but the body roll and rear end bouncing around was a thing of the past. Going from a top heavy station wagon with blown out original shocks and wonky springs to a new set of Stipe Shocks and brand new front and rear springs really improved the ride.

Owning a Model A Ford Keeps Me Grounded!

Some days it feels like I am plugging holes in a sinking ship. Every time I fix something on the Woody, some other strange thing pops up...

I recently replaced the old, rusty Western Auto distributor with a brand new one with modern upper plate from Snyder's. I figured it was worth replacing due to the worn bushings and rusty single piece shaft. I'll keep the old one on the shelf for an emergency swap if needed.

The install was uneventful. I pulled the old distributor out and then since the new distributor had the correct two piece shaft, I lightly coated the new lower shaft with anti-sieze and dropped it into the block. A quick twist of a long slotted screwdriver and the shaft dropped into place. I installed the new distributor and timed it using the instructions found at http://abarnyard.com/workshop/timing.htm. It fired right up, and ran smoother than before. I let it run for about 10 minutes to get up to operating temp, and then ran the gas out of the carb, shut the key off, and then disconnected the battery.

Pushing my luck, I decided to swap out the leaky Tillotson Model X with a correct rebuilt Zenith I had recently purchased from Bert's. I installed the new carb and snugged everything up... and then went to start it back up...

I connect the battery, go through the normal starting procedures and nada. Nothing. It was like the battery wasn't connected. Pressing the starter did nothing... not a pop, a buzz, etc.

I went through the basic electrical troubleshooting and couldn't figure it out. All my readings were as expected. I decided to give it a rest and throw the trickle charger on it "just in case".

The next day I reran my tests and got the same results. I finally gave up and sent a PM over to a knowledgeable member of the Ford Barn forum. He replied almost instantly with "call me"... so I did. 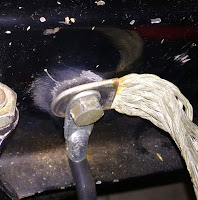 We reran all the basic tests with the same results. Finally ending the call with advice to check all my electrical connections; especially the ground to frame.

I ended up removing the ground from the frame and taking a wire brush to the frame. I connected everything up, and Boom! The engine fired right up!

Key learning here was even though my Model A has always been garaged, corrosion can and will happen. I'm going to go through the entire electrical system at some point to make sure all the connections are clean and well connected.